A Short history compiled for the Centenary of Leeds Theosophical Society

Alfred R. Orage (1873 – 1934) with others, founded the Lodge on 19 September 1900, and was its first President. Orage produced his own journal – The New Age – for many years. George Bernard Shaw said that Orage was the most brilliant editor that England had produced for a hundred years. While T. S. Eliot wrote of him as the “finest critical intelligence of our day.”

Orage ran a variety of study groups. One of these included Dr Maurice Nicholl – one of Dr Carl Jung‘s foremost exponents. In 1914 Orage met P. D. Ouspensky, by 1920 they had begun a group in the western world studying Gurdjieff‘s ideas and in 1924, Orage went to New York with Gurdjieff. He organised groups to study Gurdjieff’s ideas and demonstrate sacred dance. He returned to England in 1932 whereupon he founded the New English Weekly. Orage died in November 1934 at the age of 61.

Leeds Lodge had no permanent home for its first ten years of operation. Between 1911 and 1917 the Lodge purchased numbers 12 to 14 Queen Square for the sum of £1,350. In the 1920s the premises were extended and major alterations undertaken at a cost of £450. This was to increase the size of the lecture hall so that it could seat 200 to 300 people.

It was only through the hard work of three Leeds Lodge officers that the Lodge is in such a secure position today. They were: Mrs Annie Hyde, who was President for ten very difficult years (1929 – 39); Mr Foulds, the Secretary and Mr Fielding, the Treasurer. Our gratitude goes out to these three members. Loving service has also been given by many members in more recent years. 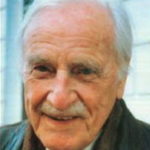 THE PATH AND ZODIAC WINDOWS

The Zodiac Windows were restored in 2000 by Leeds Lodge to celebrate their centenary. They have been fitted into an oak frame with diffused lighting behind. 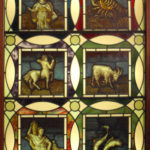 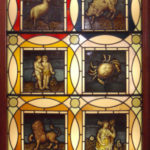 The Path is a Peace Window produced to commemorate the end of World War I. The window cost £100 and is to this day situated in the Leeds Lodge Library. 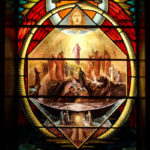 The original design was by Reginald Willoughby Machell (1854-1927) who met H. P. Blavatsky and joined The Theosophical Society in 1888. In 1900 he joined the staff of the Society at Point Loma, California. A description of the design by the artist is here.

There is a great deal of beautiful poker work in the Lodge building which has to be seen to be appreciated. This makes a very fine display in the art nouveau style.

You are welcome to attend out meetings and come along to view our beautiful building.